Save someone’s life – fire them!

Firing employees is among the most challenging tasks a director or CEO has to take care of. Indeed, I know a good number of seasoned managers who privately admit that laying off people remains the one part of their job that they are afraid of.

Pussyfooting around the challenge of laying off problematic staff only ever makes the problem worse. The presence of even just a single unsuitable employee can be hugely detrimental to the health and success of an organisation, especially in smaller ones.

How do you best ensure that your organisation does not waste time and precious resources on staff that don’t contribute sufficiently?

It’s time to look at this subject from another perspective. Here is how to get a fresh perspective on the notion of letting staff go. What I will show you will not only make your own life as manager easier and less stressful but also significantly improve how your organisation is run. Just a a heads-up, all cases mentioned in this article have been altered ever so slightly to make it impossible to trace them back to a specific person.

If you are (or are likely to be in the future) in charge of managing other staff and having to make decisions about their potentially not being employed anymore, I highly recommend you develop ways to take an entirely different perspective.

E.g., look at it from the standpoint of the employee having ended up in the wrong job, and your task is to set them free to pursue their real calling in life.

Just to be clear, this approach is not going to work for every case. There are a whole number of different underlying scenarios and methods, and I am citing this merely as one example (though it’s applicable more often than you’d probably think).

Having handled 50+ cases of laying off employees, I have come to realise that approaching the subject of firing / laying off / making staff redundant needs to be looked at with a different, positive mindset. The rest of this article will help you get onto the right path for achieving such a new mindset.

Have this book author be your mentor

In retrospective, I wish I had had a mentor to guide me through this subject. As a young manager, you need something, or someone, to prepare you for the – inevitable! – situation of employees bursting out in tears when you break the news to them. If this hits you unprepared, firing staff will indeed be the most stressful and unpleasant part of your managerial work.

I would like to point you towards a book that I found so remarkably insightful, and so little known in management circles that I felt it necessary to issue a proper recommendation for young managers to read it.

It’s not often that you come across a book where with virtually every turn of the page you think, “If only someone had given me a copy of this before I started my career”.

This book here is such a case: 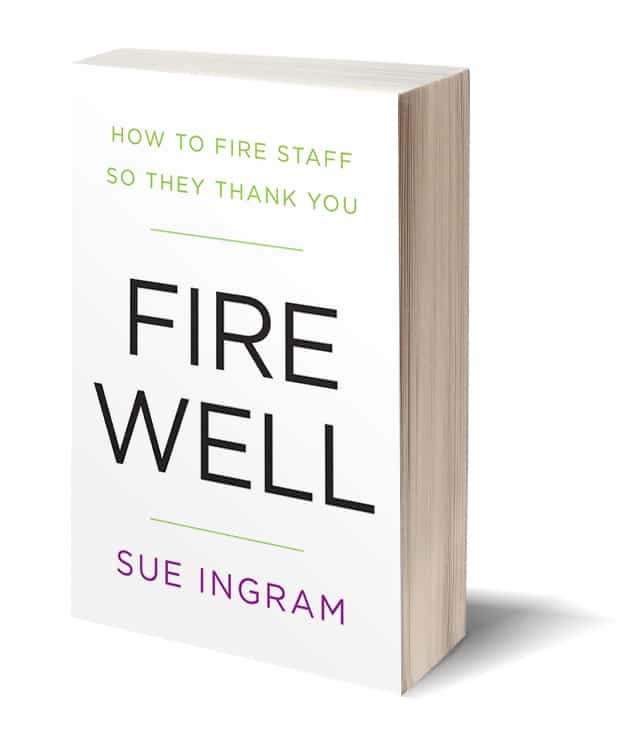 “Fire Well – How to fire staff so they thank you”

It came out in 2015, and as of writing this article has Amazon Bestseller Ranking 576,000, i.e. it probably at best sold a few thousand copies. It’s unlikely your university professor will have pointed it out to you, nor are you likely to find it in the Bestseller corner of your local book store.

Read it once, and then regularly refer to it. It is one of the most insightful, practical management books I have read in quite a while (and I read a lot!).

It’s all about being a good boss

Different from what you would expect, the book starts out with techniques how a good manager gets to know their team. It is the positive reframing that I mentioned earlier. Being good at firing staff is not a sign of you being a nasty person, it’s a sign of being a good manager who first tries everything to help staff perform but then also undertakes the necessary step once everything has failed.

If your staff respects you for being both competent and fair, then the entire process of laying off a staff member will always be much smoother.

Being good at firing staff is not a sign of you being a nasty person, it’s a sign of being a good manager

It will also make the process less disruptive when it comes to the effect any laying off inevitably will have on the rest of your team. Imagine how the remaining team would view you if you dismissed someone unfairly or without a proper process leading up to it. On the other hand, giving everyone the chance of being taken through a transparent process makes the entire subject so much less daunting once the moment for the awkward conversation has arrived.

Many an employee will by then already have had an inkling of what’s to come, and they will enter the conversation being mentally prepared rather than feeling like they are being hit by a hammer. It will reduce your stress level during the process by at least 50%, and minimise the risk of major disruptions to the rest of the organisation.

What happens if you procrastinate

The book also tackles the instance of a well-intentioned manager who shies away from laying off a staff member because they consider it unkind.

Leaving someone in a position that they are not suitable for is cruel. Slowly, over time, that person’s self-confidence and self-worth will erode. They end up in a downward spiral from which it will be increasingly difficult to escape.

Firing that person is not just a legal and moral duty towards the company, but also, ultimately, sets that employee free to pursue something more in line with what he or she requires in life.

Leaving someone in a position that they are not suitable for is cruel.

Hence, the positive reframing that I mentioned earlier.

Just how important it is for an organisation to be able to evaluate and, if necessary, lay off staff, is something that you cannot possibly underestimate. The following numbers will show this.

A 2013 Gallup poll carried out among 230,000 employees in 142 countries found that an incredible 24% of staff are actively disengaged from their work and would even support activity that is outright detrimental to the organisation. Not tackling the issue of employees that have to be laid off costs industry many billions of destroyed value each year. Figures like this show that in most organisations, the wrong kind of staff members are allowed to accumulate.

Evidently, something is wrong in the management of these organisations. Do you want to be among them, or would you rather see your company and your team advance at maximum speed? This is why I strongly suggest that managers view the firing of staff as a skill that they need to learn and get comfortable with.

Ingram’s has structured her book in short, accessible chapters that take you through virtually every aspect that there is to firing employees.

The London-based HR consultant wrote a book that is about developing a step-by-step approach to the difficult subject and helping you become a supportive manager.

The book is clean, clear and straightforward, just as management itself should be!

Ingram also writes a blog, and there is a 5-minute web video available of her speaking.

For full disclosure, I never had any contact with her before publishing this article. I do hope, though, that she’ll enjoy seeing someone review her book some two years after it came out. Having had a look around for good HR books on firing staff members, I consider hers the best – by far!

Why any employee can benefit from reading this book

One final word, even if you are an employee without any responsibility for staffing decisions, you could benefit from reading this book. It will teach you the perspective your supervisor might have or should have. You can even poke your supervisor and ask him or her to take some of the advice of “Fire Well” into consideration when it comes to managing and supporting their staff.

One firing I love looking back to

The following case will always remain in my mind, as a perfect case study of the human aspect of laying off employees.

Obviously, I will not mention names…

I fired an employee who had been with her organisation for 15 years, and who felt that laying her off was akin to taking away her life.

Sadly, her employer simply couldn’t justify her position anymore. Her original project had ceased to exist years ago, and she had been given an alternative position because she was treated as a pity case. Her qualifications didn’t fit the new job and the organisation didn’t benefit from having her around. The organisation wasted money, and her career stalled. Everyone in the organisation knew that she wasn’t productive, which undermined management’s credibility.

Over the years, she had grown to think the organisation owed her a living and was going to keep her for life. Tears ensued, and the separation process was traumatic for both sides.

However, fast forward just twelve months, and it had all turned out for the better.

Following her firing, she found the time and energy to go on a diet and shed her significant excess weight. She started to educate herself for a different position altogether and subsequently found a job where she now has a thriving career. Evidently, firing her was to everyone’s benefit.

On the odd occasion when I see her personally, she still thanks me for the positive changes I brought to her life. She looks healthy and happy, something that could not be said of her when she was in her old job.

Thank goodness for niche publishers – act on their advice!

Chances are, if you are a young student or a lone executive, you’ll be hard pressed to find a mentor to personally take you through such difficult subjects. Luckily though, there is a thriving sector of alternative media and niche publishing where you can find information and inspiration, including this blog!

The entire subject of firing (and being fired) is one that I could write about for pages and pages. I will, without a doubt, come back to it repeatedly over the coming months.

Now go on, and put someone out of their misery…. 😈 Just kidding!